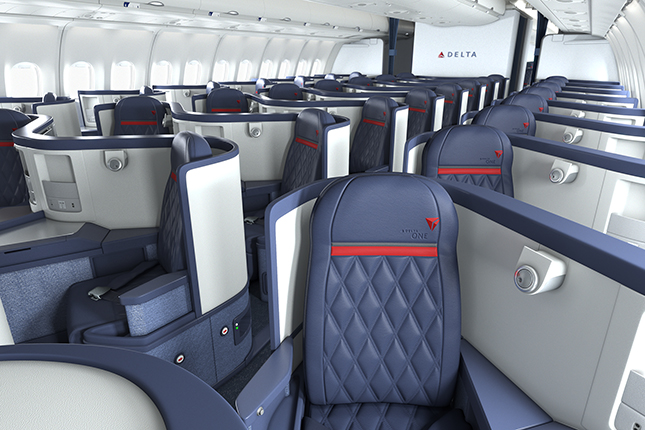 From entering the airport in Paris, to waiting to board the plane, less than an hour had passed. The Delta team was amazing. While sitting in the boarding area, away from the crowd, people came to us and gave us their condolences. But I still wasn’t fully accepting the reality. I still was angry with myself for blocking her calls.  Her last calls came the day before she died.  What I would give to have talked with her.  Just one more time.

They boarded us last, and led us to first class.  It was a sweet gesture, but the seats were isolated in an odd fashion: Ted and I had a wall between us.  We still managed to hold hands when we weren’t curled up in our individual cubbies s 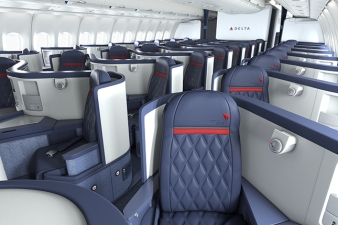 obbing into a pillow or managing to grab a few moments of much needed sleep.

It was the longest flight I’ve ever taken.  The attendants did their best to console us.  But I could tell how helpless they felt.  It truly is amazing when you witness profound sympathy from a complete stranger.  In spite of what Ted and I were dealing with, our belief that most humans are good, kind and compassionate was proven on that airplane.

Our flight took us from Paris to Minneapolis.  Or Michigan. Or Milwaukie.  I truly can’t remember. I vaguely remember exiting the airplane, being met by two Delta employees, and following them through the terminal. I also recall sitting in a lounge area somewhere in America staring at my feet while Ted made phone calls and arrangements. Delta team members were so kind and helpful in finding a place for us that was private, and quiet.  They checked on us periodically to see if we were hungry, or if there was anything we needed.

Then somehow we were seated again on a plane and heading home.  I once again stared at my feet, my mind and heart racing.  Why the hell did I block her calls?  Why didn’t I take a bit more time with her?  Some regrets are incalculably haunting.

We landed and went to baggage claim. One of our bags did not make it. Delta promised to deliver it to our condo the following day.  I can’t remember how we left it other than turning and heading for the exit.

We met our youngest daughter and her boyfriend outside the terminal. Seeing her gave me mixed emotions. I’d managed to call her boyfriend when we were still at the airport in Paris and had him go to her and explain, as best he good, what had happened. She was working as a counselor at a camp. It was the middle of the night when he finally got to her, having driven from several hours away. I can’t even imagine what she experienced: being woken in the middle of the night to discover just how horribly your life had changed. I am eternally grateful that a young man grew up in an instant and delivered news so incredibly earth shattering.

Em and I held each other tightly, sobbing and saying how sorry and shocked we were.  It felt good to hold her.  Something so familiar provided much needed comfort, even if it didn’t change the reality slowly settling on us.  We climbed into the car and headed for home.

The ride was quiet. I can’t even remember what we talked about. I just remember staring out the window at familiar sites, but seeing absolutely nothing. So many times, on our return home from visits to Arizona, California and Oregon, I’d point out landmarks and tell Dot and Em about them.  Now these landmarks seemed foreign.

When we got to the condo, I just collapsed. It really wasn’t home yet. We’d only moved into it a couple of weeks before our trip. We’d sold the house  where we’d raised our girls to move closer to Dot, and to downsize.

Dot only visited the new place once. It was Father’s Day. We have a beautiful view of a lake, and 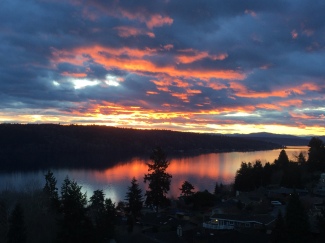 she loved it. I can still see her look of awe when she saw it for the first time. In fact, as family arrived, she made sure they got a look at the view.  I loved watching her gaze out over the water, a giant smile of amazement on her face.  I couldn’t wait to have her over during the summer to sit on the deck with me and watch life go by on the lake. But now I would watch the life go by and wonder what she would think or say or feel.

The following morning, after a restless night’s sleep, we met with the funeral home director.  The funeral home was literally across the street from our condo.  When we were considering purchasing it, on our list of reasons we should buy it, along with wheelchair accessibility and a great view, we joked that it was convenient to a cemetery.  That was no longer funny.  It was reality.

And there we sat talking about something no parent should ever have to, and it was unbearable and painful and cruel.  My parents, sister and brother-in-law, who had been with Dot that horrible night, sat with us, all of us worn out from shock and grief. The details were plentiful, but hard to even think about, let alone decide upon.  It just didn’t seem real, just mind numbingly disgusting.

It isn’t normal having to make plans to bury your child.  We’ve never considered our lives normal.  But even when the uncommon elements seemed overwhelming, we learned to normalize them.

This was our “normal”.  Having to drive a wheelchair van.  Finding homes that are wheelchair accessible.  Figuring out how to push a manual chair with one hand and a shopping cart with another.  Creatively parking your wheelchair van when there are no handicapped spaces available. Apologizing for a store display that had been toppled by an inattentive wheelchair driver. These became our normal, and were to be expected parts of the remainder of lives.  Now, that normal had been interrupted by something abnormal.

After making as many decisions as we were capable of, we were invited into the room where we would see our precious Dot one last time.  My heart was beating out of my chest.  My stomach turned into knots.  My throat hurt from the lump in it that hadn’t left since we heard the EMTs “call it”.

But I couldn’t wait to see her.  I ached to see her. To hold her. To smell her sweet scent and run my fingers through her beautiful hair. To tell her how very sorry I was that I wasn’t there for her.  And that I hadn’t taken her calls. That we didn’t get to spend a bit more time together.

When they opened the door, I saw that mop of brown hair and ran to her.  She was beautiful.  She had such a peaceful look on her face, a soft smile on her pouty lips, her long eyelashes sweetly closed and still.  But she wasn’t the Dot I knew.

Gone was the excited giggle she gave when I entered the room.  Missing was the glee she had in showing me something she’d been working on in her “woom”.  Absent was the bright smile and shiny eyes that lit up the world.

She looked like she was sleeping. And I bent down and kissed her cheek, then hugged her.  She was stiff and cold, but I hope for the miracle that she just might wake up, pleading with God to let her rise again like Lazarus, and Jesus. That this was all just a mistake.  A not-so-simple misunderstanding.  But I knew that was impossible, and it was devastating.

At first it felt like it was only Dot and myself in that room.  But then I noticed my other daughte 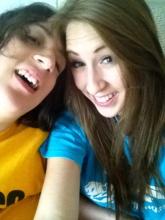 r sobbing on the floor, and I realized that this was hard on all of us. As if she was still alive and breathing, I told Dot that I was going to leave her for a minute so I could comfort her sister.

I went to Emma and tried to hold and comfort her.  Em just wanted to be left alone for a moment.  It hurt to see her feeling such profound grief, and it was out of my control.  I could always find ways to comfort her when she was hurting.  When friends had been mean.  When grades on tests were not what she expected.  When boys broke her heart.  When a pet passed away. But this was different, and I knew that I had to step away and let her be.  And that was excruciating.

When I turned back to Dot I saw my husband, bent over his precious child, weeping.  I felt compelled to go and comfort him.  We held each other for a long time and just let every ounce of our grief spill out.  The two of us had weathered so many storms in our marriage, and always ended up stronger.  But this storm had us battered and bruised.  To just hold each other and cry over the death of our child seemed unreal.  We held each other after a miscarriage. When we found out that Dot’s twin wouldn’t make it.  When his dad passed.  When his mom passed. We always found great comfort in one another’s arms. And, as so many other times, we held each other tightly, feeling our grief in unison. But it wasn’t comforting.  It just…was.

We finally let go of each other and, together, went to Dot for one last kiss go

odbye.  I held two of her favorite stuffed animals.  One was a pink creature that, when squeezed, said, “I love you.” Or, “You’re so beautiful!”  It was given to her from two of Ted’s former students who had cared for her when Ted and I were in China eight years before. Dot loved it, especially manipulating the voice control.

The other was a dog named Krinkels that had been a Christmas gift from Santa to me when I was a child.  Dot loved it because it had belonged to me, and it was her go-to comfort when she didn’t feel well.  The dog had a little bell in one of the ears, and its sound added to my upset as I gently placed it in one of her arms.  I put the pink doll in Dot’s other arm, bent down to kiss her, then touched her face one last time.  I whispered my love to her, went to help my other daughter stand so she could go to Dot and say goodbye, then left the room empty handed, and empty hearted.

I collapsed into a chair, all of the past 36 hours  consuming my heart and my mind, and wept.  Reality had finally settled in.