When parents await their first child, they are bombarded by advice, counsel and stories about “firsts”. First cry. First smile.  First rolling over. First tooth. Firs

t crawl. First steps. First word. First full night of sleep.  These are described as rights of passage, and worn with badges of honor.  For Ted and me, our first child’s firsts were remarkably different.

When you have a child who lives with disabilities, firsts still happen, but differently.  Dot wasn’t able to roll over by herself until she was nearly 3, and after months of physical therapy.  Her first relatively clear word came at about the same age.  It was “daddy”.  Other firsts, such as steps, came with the help of gait trainers, or someone holding her up.  And they were just as magical.

Unique firsts were watching her learn how to grab objects.  For nearly a year we had to place things in her hands and wait as she struggled to wrap her chubby little fingers around it.  And the object had to be a certain size.  And gaining head control was a constant learning experience.  At times she could manage it pretty well, but as she grew, she had to learn how to renegotiate control from time to time.

She never could sit up by herself.  When she was little, we could place her legs in a criss-cross position, and she would have some control.  But again, as she grew, she lost the ability to hold herself up without help.

And that was okay.  Our “firsts” with Dot were exciting, and we wore those badges as proudly as other parents. We were okay that our timeline, and her ability, were different.  When she first learned to drive a battery operated chair by herself at age 8, we were over the moon.  She never did learn to have perfect control, and had to have someone with her when she drove, but to see her have such relative independence was a dream come true.

Now, we are facing a whole new set of firsts. Hard firsts. Emotionally difficult firsts.  The first hard “first” was celebrating a birthday without her.  She loved birthdays.  My mom’s birthday came shortly after Dot’s passing.  It was deeply hard.  Then Dot’s 25th birthday came.  She had started talking about it in January.  We knew by my birthday in April that we would take her to her favorite place for birthdays: The Seattle Space Needle.  She talked about going there nearly every time we saw her from then on.  So when that first of her birthdays without her came, we decided to do what she had planned for us to do, and we went to the Space Needle.  It seemed only right.

We then had our first holiday without her, Halloween.  She loved Halloween, especially the dressing up part.  At first she liked dressing up like Disney characters like Cind

erella, Minnie Mouse, and her favorite, Snow White.  At some point she landed on Jojo the Clown, and that would be her costume for the remainder of her Halloweens. This first Halloween without her seemed sad.  We carved a pumpkin, then walked over to her memorial, told her how much we missed her, then left the pumpkin.  It didn’t seem like Halloween without her.

Then came the first Thanksgiving.  As much as she loved birthdays, Dot loved family gatherings.  It was hard to even think about not having her with us.  We had it at my parents’ house, and a chair and place setting for her.  God how I missed hearing her giggles when either her dad or “Brampa” would tell stories.  And when we got to the part when everyone shared what they were most thankful for, how I missed hearing her say her annual answer, “my famwy”.  We all said it for her.

That first Christmas was excruciating.  We didn’t do much, knowing that it would be hard.  It was much harder than I could have imagined. It just seemed so empty and sad.  She loved getting up and opening presents.  We had just a few gifts this year, and opened them in relative quiet. She loved eating her traditional cinnamon roll, fresh out of the oven.  And she always asked for more.  This year, we made rolls, but hardly touched them.  Our traditional dinner, which we usually ate in our jammies, was not the same, and we couldn’t stay in our jammies.  It didn’t feel right.

The first New Years Eve was uneventful. I no longer cared about having a better year.  Any year without her 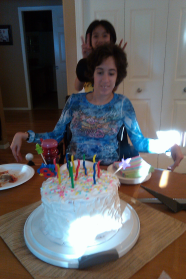 would never be better. So we didn’t do much.

Then came Emma’s birthday.  Emma had never had a birthday without her big sister.  We made plans for the weekend that included a fashion show, make over, and seeing Disney’s live-action remake of “Beauty and the Beast”.  When the first teaser trailers appeared a year earlier, I shared them with Dot, and told her we’d take her sister for her birthday.  She got so excited.

I purchased three tickets for a 3D version at an Imax theater weeks before, but told Ted that we would not pressure him into going.  His connection with Dot and that movie was so personal.  She loved the soundtrack, and would insist on dancing with her dad to the theme song.  He almost always obliged. When the day arrived for us to see the movie, Ted dropped Em and me off at the theater, then picked us up afterwards.  He felt no pressure to go, and did not want to disrupt Emma’s day with his emotions.  She was so understanding, and just enjoyed having him meet us after the movie.

And now we are experiencing my first birthday without Dot in 25 years.  Because birthdays were so special to her, especially my birthday, we enjoyed letting her in on the planning.  With the help of my parents, last year she made plans on taking me to a pancake restaurant for my birthday.  When we picked her up, she was so excited.  At the time, she’d been having more seizures when she became over excited, so we tried our best to keep things calm.  We managed to get to the restaurant without incident. But less than an hour into the breakfast, she had a seizure.  We loaded her into the car, and took her back to her house.  We stayed with her for a while.  She was upset that my birthday didn’t go according to her plan.  We reassured her that there would be plenty more birthdays for her to plan.

So here we are, and I’m a wreck.  Yesterday Emma, Ted and I spent a quiet Easter together.  We visited Dot’s memorial and left her an Easter basket of flowers.  My parents left a basket the day before.  It wasn’t where we thought we’d spend the day with her.

We did have a small family dinner at my parents’ house with my sister and brother-in-law.  It was part Easter, and part birthday.  I enjoy my family, but I couldn’t shake the feeling that something was missing: a huge part of what made these gatherings so much fun, and worth the effort.  I appreciate my family and how much they are trying to help us all learn to adjust to a new normal.  But my heart is still shattered, and days like this are not what they used to be.  It will never feel normal.

For my birthday, I took the day off from work.  I knew ahead of time that this day would be hard.  It’s Easter Monday, so I decided to do something that represented life 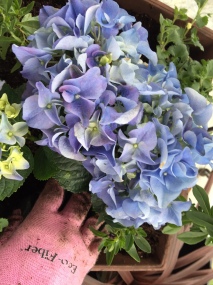 . I purchased some new pots, soil, compost and plants for our deck.  I spent the afternoon planting, putting my hands in the soil, carefully arranging the plants, feeding and watering them.

I remembered the times Dot helped me work in our garden.  Remembered the life she brought to our lives. Remembered that she overcame death as an infant. Remembering that, though she is gone from us now, we have the promise, in the resurrected Christ, that we will see her again. Hallelujah, what a Savior.

One thought on “Firsts”